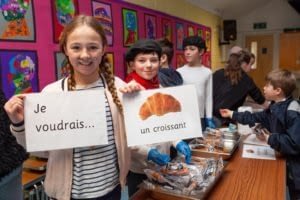 Singing, creativity and authenticity are very much a part of learning French at Spring Grove. From Nursery right up to Prep 6, pupils enjoy the sounds and words of a second language by playing with them, listening to them and experimenting with them in rhymes, games, plays, stories, songs and poems.

French is used for a real purpose as often as possible: