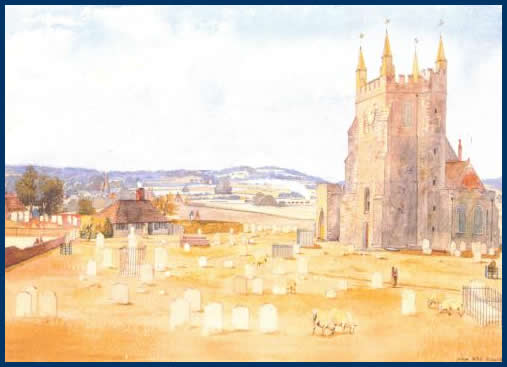 Spring Grove boasts a long and fascinating history before it became the happy, family school of today. The school is set in 14 acres of beautiful Kent countryside and is based in a magnificent Stuart house, completed in the late 17th century.

The house was built in 1674 by Dr Thomas Brett and lived in subsequently by generations of the same Brett family. In the mid-19th century Spring Grove was home to Charles Jenyns, a businessman who moved from London to Wye to take advantage of the new, fast train service from rural Kent into the City: perhaps an early example of regular commuting into town. Jenyns was also an amateur painter and his watercolour of Wye, which includes a passing train, hangs in Wye Church.

Research has shown that during the 20th century Spring Grove was lived in by the writer Joseph Conrad for 6 months in 1919, and a little over a 100 years before that, Jane Austen may well have been a visitor to the house when she was staying at Godmersham House.

Mrs June Cobb was the Headmistress for the first ten years of the school’s life. In the 1980s Niall Washington-Jones guided the school and established its reputation as a family school with a homely atmosphere and emphasis on good manners. In 2003 a group of parents bought the school and set it up as a charitable trust administered by a Board of Governors. Craig Gibbs served as Headmaster from 2004 – 2007.

From 2008-2020 Bill Jones was Headmaster and, together with his wife Hilary, strengthened Spring Grove’s reputation as a school that provides a first-class preparation for primary age pupils for their next schools. Bill was succeeded as Head in Autumn 2020 by Mrs Therésa Jaggard.

SG50 was launched in 2017 to celebrate 50 years of Spring Grove School. In September 2017, the school’s first two pupils, David Christopherson and Roger Pitt, visited and spoke to the children about how the school helped them to forge their life-long friendship, in a wonderful illustration of the powerful part the school can play in the lives of its pupils. In May 2018, a whole-school photograph included Springgrovians and Huw Jones, son of Bill and Hilary Jones and Scotland Rugby International, who also opened the school’s new Sports Pavilion.